Skip to Content
Whether I'm doing research for on-page SEO, optimized content writing or building pay-per-click keyword lists, I generally turn to the Google Adwords Keyword Tool. Mind you, I don't love this tool, but it's the most consistent/reliable free tool currently available, in my opinion. Now, I could cry all day long about how much I miss the Overture Search Term Suggestion Tool and how much better it was for drilling deep for long tail keywords, but it's been nearly 4 years so I think it's time to move on. Seriously though, the ability to harvest so many great long tail keywords with Overture's tool was very valuable to me as far back as 2002 (millennia ago in the world of internet marketing), because I've generally found that long-tail keywords can be among the most targeted yet allow for lower PPC bids because the competition is lower. Side Note: As the search marketing world turns... Over the past decade we've seen Overture acquired by Yahoo! Search Marketing, who later retired the Search Term Suggestion Tool. And then just about 18 months ago Yahoo! gave up on it's own PPC offerings all together and began to partner with Microsoft (Bing) Adcenter. Since then, ALL pay-per-click ads on both Bing and Yahoo! have been powered by Microsoft Adcenter. After Overture broke my heart and ran out on me, I did the only thing I knew how to - I rebounded with the Google Adwords keyword tool. I had always thought she was much better looking, but she lacked the substance I was looking for. Still, where am I going to meet another keyword tool? In time I grew to tolerate the Google tool and figured out ways to build large keyword lists. A couple of years back, Google overhauled the tool leaving us all learning a new tool (or being forced to make an extra click for the old version. Sound familiar?). Eventually the old version link disappeared and we were all forced to learn the new tool. It's never been great in my opinion, but it's been adequate. Then today I noticed the helpful folks at Google Adwords are testing a new (optional) feature in the keyword tool - "Ad Group Ideas (Beta)". "Ad Group Ideas" is exactly what it sounds like - suggestions for ways to group your keywords. As you'll see in the screen shot below, your normal keyword research results now show up under a "Keyword ideas" tab and Google has added an "Ad group ideas (Beta)" tab. Essentially you just click over to the "Ad group ideas" tab and you'll see your keywords grouped how Google's robots feel they'll work best. The trouble is AI (artificial intelligence) is still far from perfected, especially when it comes to PPC advertising online.

I can see how this might seem (and possibly even be) useful for the small business owner who is trying to manage their own campaigns with minimal time invested. But this level of automation will never come close to being able to understand your business and customers like you do. If you've ever used Google Adwords at all and looked at the "opportunities" tab, you've undoubtedly seen a lot of poor suggestions for keywords Google thinks you should add to your ad groups. There will be some good suggestions (which makes me wonder where those suggestions were in the keyword tool when creating initial keyword lists), but you'll definitely find there are limitations to Google's understanding of your ad groups. So here's what this all boils down to for me - Why add in the imperfection Google usually brings to the table after your campaigns are set up and running (new keyword suggestions under the "opportunities" tab) at the initial keyword list building stage? My guess is that this will lead to a lot of inexperienced Adwords users allowing less targeted keywords to slip through (or be grouped in less than ideal ways). I've personally witnessed how money is wasted when other PPC managers accept all of Google's recommendations (without review) on the back end to save time. I can appreciate the appeal, but I prefer to spend the time up front so my campaigns are well optimized before I even activate them for the first time. Besides, I already have a not-so-secret weapon for organizing keywords in a pretty efficient way - Google Adwords Editor:

AdWords Editor is a free Google application for managing your AdWords campaigns. Use it to download your account, update your campaigns with powerful editing tools, then upload your changes to AdWords.

This thing is loaded with a lot of great features, but it's the filtering and drag-and-drop functionality that I find most impressive and useful. You can filter large lists of keywords, ads, ad groups and campaigns by word, phrase or partial word. So, you can set up a campaign (before posting from the  tool to your live account) with a all keywords in a single ad group within that campaign. You can then begin to filter and then group your keywords by dragging and dropping filtered lists of keywords. As I said earlier, you'll know how to group things better than Google's automation technology ever will. You'll be able to see if after creating an ad group, whether you can actually split that ad group in to smaller and even more targeted ad groups, allowing you to customize your ad text in a more targeted way. Over the years, the flexibility this tool offers has allowed me to easily work with massive keyword lists and build well optimized campaigns and ad groups. 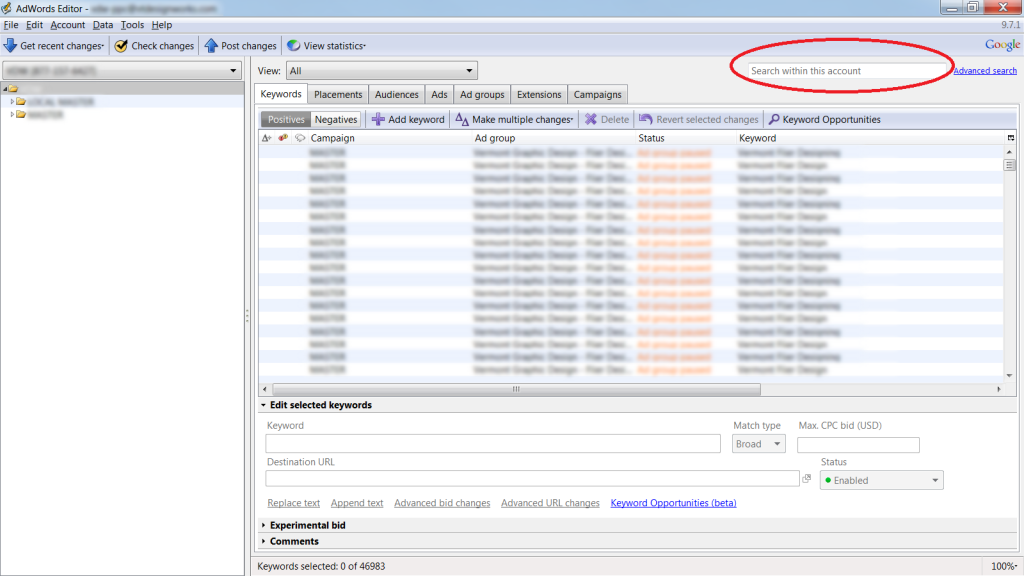 I should point out that others have higher hopes for "Ad Group Ideas", while acknowledging the limitations at least during beta testing. In the end, I still personally recommend creating and organizing your own ad groups and always carefully reviewing all of Google's suggestions before changing anything based on them. As amazing as modern technology is, I think we're still a ways away from this level of automation working as well as human management when it comes to PPC advertising. You're a human, so it stands to reason you understand better how other humans think. It all boils down to the fact that computers rely far more on logic than most people so they're incapable of "thinking outside the box". Let us know what you think of the new "Ad Group Ideas" feature of the Google Adwords Keyword Tool in the comments below. Also, if you're tired of trying to manage your own PPC with limited knowledge or you're only now considering PPC as an option and you don't know where to begin, drop us a line today.