Skip to Content
At first glance, last month's announcement of Google's Project Glass may have seemed like another Google April Fools prank, but it quickly became clear that this was a serious endeavor by the king of web search. (If you haven't seen the Windows parody, do so now). Of course, the idea of bringing your computer monitor and smartphone to mini-screens on the inside of high-tech, voice controlled glasses is still a only in the early concept stage. But that doesn't mean you can't experience Google Goggles on some level even today: Okay, so Google Goggles is an app that isn't really anything like Google Glass... But it's still very cool. With so many of us now take for granted the ability to do high-speed web searches on the go through our mobile phones, increasingly via speech-to-text rather than fooling around with touch screen keyboards, the ability to search by snapping a photo is the next step in this natural progression of easy mobile search. Try it out today by downloading the app for your Android device through Google Play or for your iPhone here, or through the App Store. Now watch some British dude run around San Francisco while showing you how to use Google Goggles: As you might expect, Google has really been pushing their own Android apps lately, but clearly recognizing the continued popularity of the iPhone, they offer a rather impressive suite of Google apps for those devices as well. There are obviously limitations to what this new technology can do today, but the implications are incredible when you consider what they must be cooking in the lab. For now there are just a handful of types of objects that Google is able to reliably use for photo-to-search, but many of them are the types of items we encounter and would use Google Googles to interact with every day: 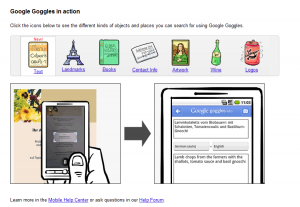 If Google isn't overhyping what Goggles can do, then we are entering a strange new world my friends. It already boggles the mind to think about where we're at with voice-to-text, facial recognition, Siri/iris, instant translation and on and on. Considering the speed with which technology is moving, can you imagine what our mobile devices will be capable even a year from now.

Full disclosure: I have the app for my iPhone 4S and it's pretty amazing to witness the technology "in action", but I haven't yet had the occasiona to use it in the "real world", unless taking pictures of random things around my apartment counts. Seeing Google search a sentence off the front of a magazine or pull up information about my toothpaste isn't quite as impressive as getting back instant information about a landmark of painting. I have however been very impressed with my other Google apps and after witnessing the intelligence behind apps like Shazam, I'm relatively certain much more intelligence photo-to-search is just around the corner.

Has anyone else actually unleashed this beast and put it to the test? I'd be interested to hear your real world experiences. Do the Goggles live up to the hype?