A couple of months back when we announced the long-awaited launch of the new Farrell Distributing site, but our relationship with Vermont's premier beverage distributor didn't end there. Like many of our clients, we've partnered with Farrell to handle their ongoing web maintenance and occasional consulting on SEO and online marketing strategies. During a recent discussion about basic on-page SEO, Farrell inquired as to why we chose to optimize for "microbrew" keywords as opposed to "craft beer". The answer was simple - microbrew was one of the suggestions they had provided us initially back in 2011, not craft beer. And with good reason - at the time searches volume for the former greatly dwarfed the latter. We checked both at the time, but it was clear that "microbrew" was the industry buzzword of 2011, so our client knew their business.

Adapting SEO to Changes in Language

Fast forward to late 2013 when the "microbrew" vs. "craft beer" discussion arose, again triggered by our well informed client who recognized that the jargon is now different and wondered if it was time for a change. Sure enough, Google search volume indicated that there had been a dramatic shift in favor of "craft beer": 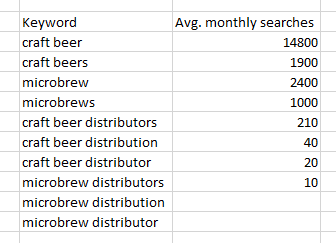 The data clearly speaks for itself. Farrell's own gut instinct on how their target audience searches now backed up by these figures allowed them to update the keyword optimization on their site and in their title tags. Seeing as Vermont is the state with the most craft breweries per capita, I'd be remiss if I didn't also mention that I'm certain many beer aficionados like those at Hop It Up would be appalled that we're treating the terms "microbrew" and "craft beer" as synonymous. While there is certainly some overlap, they are technically defined differently and not mutually inclusive:

The classification of micro-brewery has to do with the number of beer barrels it produces in a year, which is a limit of 15,000 beer barrels a year (460,000 US gal).

Now on to craft beers. The term craft beer is largely an american term, although it is common in New Zealand and Canada as well. These beers are brewed without adjuncts, like corn or rice. An adjunct is unmalted grains, like rice, corn, and wheat among other usual suspects. These ingredients are used in the mash to keep cost down or as I learned very recently it will actually help keep a better foam. So your beer will look all pretty. I don't want to get all technical on you but I thought a quick explanation what a adjunct is would be helpful.

Important distinctions for connoisseurs, but the rest of the world uses the terms interchangeably, which is what matters to Farrell in this case. They carry all varieties, but want to appeal to the largest search audience possible, so the primary concern is which terms receive the most searches.

The lesson here, of course, is that you need to think like your audience and not get hung up on inside baseball or even flowery "company philosophy" language. Even though Farrell is a business-to-business operation whose target audience is breweries and retailers, the people who work for these other companies are "real people" like the rest of us, not language Nazis who get hung up on the semantics of annual barrels produced and malt percentages. Hummingbird, Google's latest algorithm change - and largest in over a decade - was actually all about "semantic search" - better understanding user search intent to deliver better search results. Still, artificial intelligence will never be perfect and there's no reason we shouldn't help the process by including "real people" search terms in our search engine optimization efforts. Effective SEO, like most internet marketing strategies, is an exercise in putting yourself in the shoes of your target audience and asking "what would I search?". If you need any help better understanding how your target audience searches, contact us today to learn how we can help.