Skip to Content
Summary: Earlier this year Google released the "Venice" update, which improved how Google uses location settings to rank locally relevant pages in search results for generic, non-geographic searches. Essentially Google detects our IP addresses to determine our locations and then attempts to serve up locally important search results even when our search queries don't include geographic language. What does this mean for your business's website and how can you ensure you're well positioned to take advantage of these new "local organics"?

In the world of feared Google algorithmic changes, the "Venice Update" often takes a backseat to the more notorious Penguin and Panda updates, but should it? Well, that depends on your business and what types of products/services you offer. Before we get to the nitty gritty of how this may or may not impact your website, let's rewind and get it straight from the horse's mouth: After reading that, you're probably asking - "That's it!?" And unfortunately the answer is yes. One tiny bullet point in an official Google post written seven months ago, entitled Search quality highlights: 40 changes for February. But don't assume that means this isn't a big deal. Also don't dismiss it, like I almost did, as having to do with "local" results in the sense we usually mean. Generally when we talk about "local" results, we're referring to the Google Places/+ Local "local pack" that shows up within organic results, but are clearly labeled as "local" and are accompanied by a map, etc. The "local" change we're talking about today actually impacts the organic results, and NOT the local pack that shows up within them. Confusing, huh? Stick with me, it's not as complicated as it sounds. Mike Ramsey of NiftyMarketing wrote a detailed post on the SEOMoz blog about the implications of the Venice update and how you can capitalize on it. A must read that includes a lot of little-known and underutilized strategies. I also recommend that you read this other SEOMoz Blog post by Michael Cottam of OzTech, Inc. Cottam's post contains a lot of screenshot examples and is very helpful, I think, in showing just how random what he calls "local-ish" results are. In fact if you check any of his examples today, you'll see dramatically different results.

I know, in the Green Mountain state we all hear a lot about "organic food" and "buying local", but don't be confused by that section heading. I'm actually about to discuss how "Venice" impacts VT businesses. At the same time I'm coining a new SEO phrase, "local organics", which I think is more fitting than Cottam's "local-ish", for  referring to the types of search results we're discussing in this post. "Local-ish" implies they are semi-local, or not really local. But they really are local - they are just organic results (not local pack) influenced by the user's location when no location keywords are included in the query. Let's take a look at search results for a simple "restaurant" search when your location settings are "Burlington": 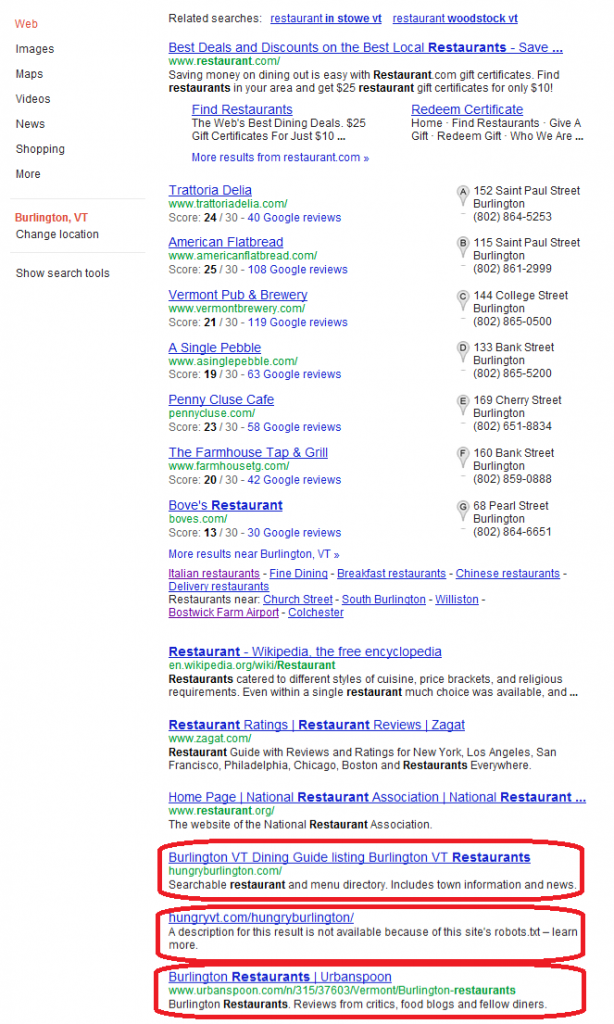 The last three results, circled in red, are "local organics", because they are Burlington/VT specific, even though my search wasn't. Again, these are shown simply due to the fact that my location setting is Burlington, VT. It's worth noting however that none of these are actual individual restaurants, but restaurant directories. It's unclear if this is a deliberate move by Google to avoid showing any bias toward one local restaurant over another. Obviously ranking factors (backlinks, content, etc.) and "local SEO" ranking factors (citations, etc.) come in to play when location language is included in the search query, but it's important to keep hammering home the point that today we're strictly dealing with non-geographic searching that produce geographic results based on location settings, which are generally chosen by Google automatically based on your IP address. Before we move on to another type of search, let's quickly compare the example above to the same search when your location is set to Boston: 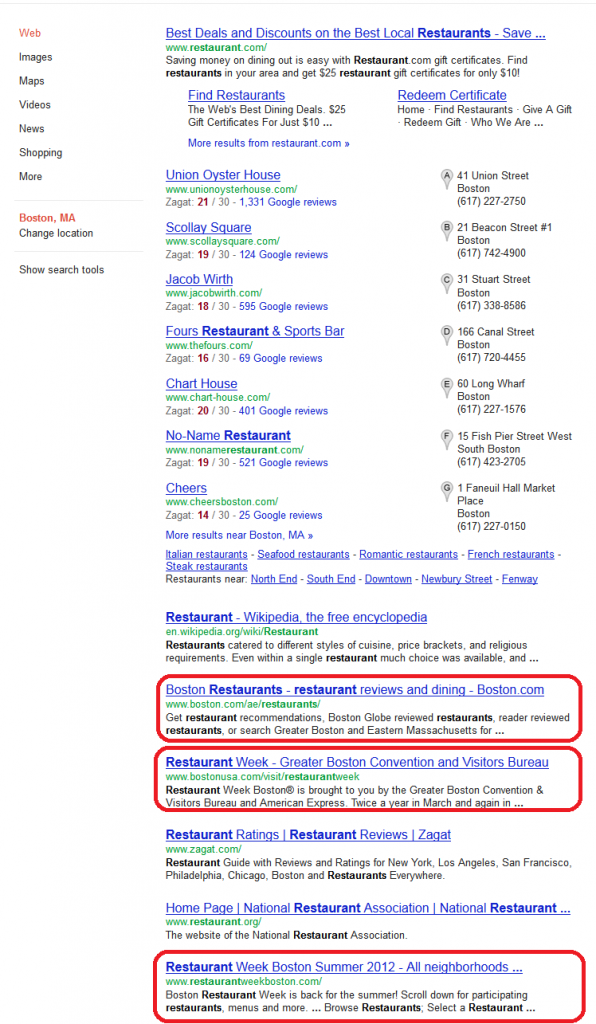 It's worth noting that while Boston is also showing 3 local organics", they are in different positions. Remember, Burlington's local organics were in the last 3 positions. Not the case for searches in Boston, so again we're seeing some randomness to all of this. Still, there aren't any individual restaurants, but there are if you do searches that include location language. Next, here's what I'm currently seeing for a "dentist" search, with my location settings back on Burlington, VT:

Still the magic number of 3 local organics holds. The differences this time? They're the top 3 positions, and one of them is actually a specific dental office, which may blow a hole in my theory about Google actively trying not to favor any individuals in local organics. I say may because it could be that it depends on the industry (type of search). It could also simply be something the algorithm mistakenly let slip through and Google would remove it if a human were to do a manual review. Unfortunately we have no way of really knowing. Now check out "auto mechanic" search results:

So now we have an example of a search that only triggered 1 local organic result. So was that consistent 3 number we'd previously seen just a coincidence? Perhaps it's industry based? Also, don't be fooled by the final result which is a Denver auto mechanic. For whatever reason, they are just ranking organically for the generic "auto mechanic" search, regardless of location setting (usually within the first couple of pages). Next, I jumped back to restaurants briefly. Why? Because it's getting toward the end of the day and someone around here has food. I caught a wif of something lemon and haven't stopped thinking about seafood since. So out of curiosity, and knowing there aren't a lot of seafood restaurants in the BTV area, let's see what comes up for Burlington users who search for "seafood":

So now we have our first example of search results that triggered just 2 local organics. You might also notice an individual restaurant, Charleston Seafood and a couple of Monterey Bay Aquarium at the bottom of the page. Obviously these are in other cities, but these are again coincidental because they're ranking globally within the first few pages of search results, regardless of location settings. They're on page 2 for the same search in Boston, which is what I looked at next. But let's stick with page 1 for the Boston location search for now: 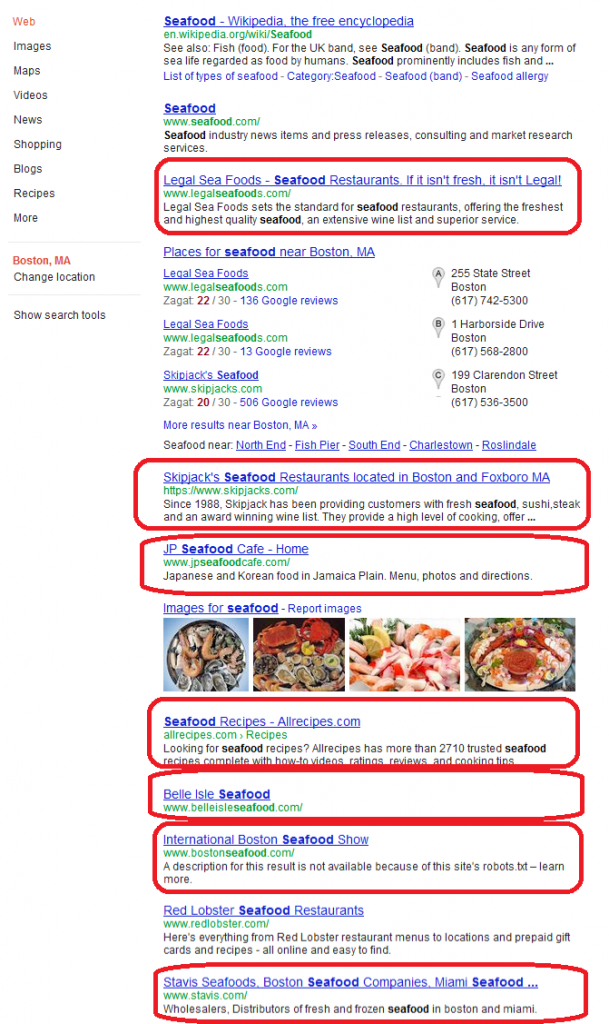 There's a lot going on here, so I think it makes the most sense to bullet point out the items that make this results page stand out:

After that last crazy example, I think I'll wrap up this post with a few of my own thoughts about "local organics". Clearly Google is all about serving up "local" results even outside of the "local pack". There's no guaranteed way to get your site ranking in "local organics", and many of these results are from yellow pages/directory type sites, but some aren't so there's potentially an opportunity there that shouldn't be ignored. I would encourage you to at least make an effort by following the strategies outlined in the SEOMoz blog post I referred to earlier. Now, I'm not going to try to predict what the future holds for "local organics", but given that the only consistent thing we're seeing right now is randomness, I feel like my hunch about where "local search" may be headed still holds true. Given that the "local pack" itself will only ever show a maximum of 7 businesses at a time, I've believed for some time that eventually Google will start to randomize these in some way to be fair to all businesses. One couldn't begrudge Google for allowing just the "top 7" followers of their guidelines to hold these coveted positions, but that's clearly not how it works now anyway, and if one day dozens or hundreds of competing companies in one region could be making the effort. But still, only the privileged few would ever show in the local pack? Google's goal of showing each individual the most relevant search results is commendable, but an issue arises when there are hundreds of businesses that are equally "relevant" to a searcher, theoretically. For example, there are literally hundreds and probably thousands of plumbers in NYC. It would seem a little odd for searchers to always be seeing the same 7. I know, that's a little simplistic because Google is pretty good at figuring out our precise locations and will probably show plumbers that are in closer proximity. But you get my point, right? Given the randomness of how Google increasingly handles "local" searches, and how the first page of search results (as a whole) changes so frequently, my hunch is that Google will at some point in the not to distant future announce that they're implementing some changes to search results that will attempt to be more fair to local businesses by cycling through/randomizing so that everyone gets some visibility. They could, and should, of course still give special treatment to those who've claimed their Google+ Local listings, have a lot of reviews, etc. Also, given the emphasis that has been placed on fresh content lately (esp. after Panda), I wouldn't be surprised if that gets factored in as well.