Summary: If you're reading this, there's a good chance that it's because you've seen an unfamiliar dish popping up on menus at your local delis and restaurants and you're dying to know just what "poutine" is. Today we answer that question while also taking a look at the interesting search results Google delivers on this topic. 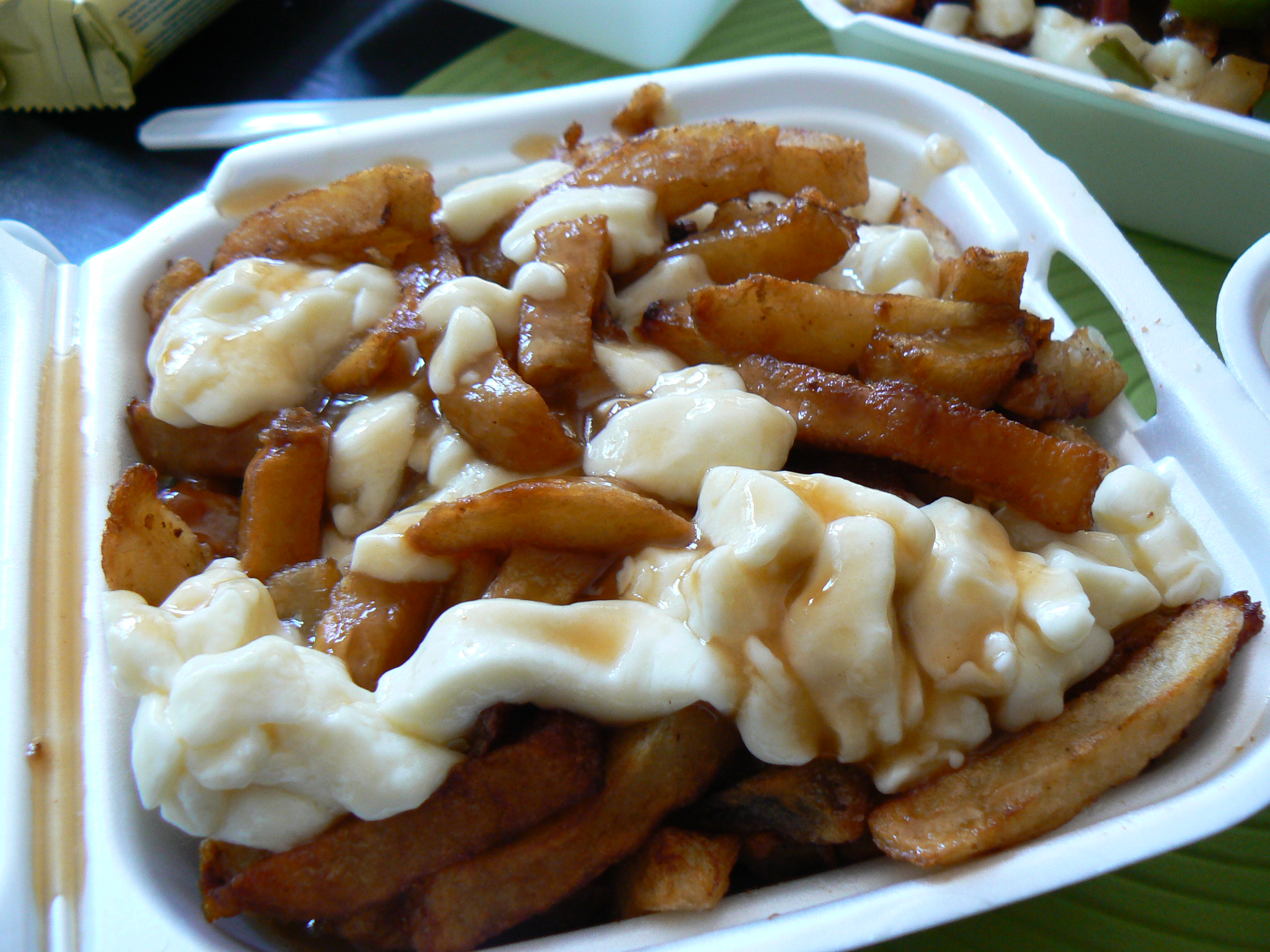 (Photo: Sjschen - Wikimedia Commons) With so many dining options these days, it can be tough to keep up with all of the latest trendy foods and ethnic cuisine options in local restaurants. Often these ephemeral fads don't even stick around long enough for us to get a sense of what they were, however there are of exceptions like Mexican/Southwestern, Barbecue and Thai. Of course, if your local restaurant gets it wrong, it can seem like even these popular options are falling out of favor. While available in other regions of the country for decades in some cases, a lot of non-traditional fare, like everything else, has been slow to reach the extreme-northeast. I suppose that's part of the reason why they might seem like flashes in the pan when only one or two small establishments open up in our neighborhoods. But what about when restaurants in a certain area that have established customer bases and complete menus all of a suddenly and almost simultaneously decide to supplement their menus with the same new item? Well, if you're in the Burlington area, you may know what I'm referring to and you've probably found yourself asking the same question I've asked myself in recent years - What in the world is "poutine" and why does it seem to be popping up on menus all over town? A surprisingly lengthy Wikipedia article sums it up nicely in the opening sentence:

Case closed. We all know Wikipedia's record after all: http://www.youtube.com/watch?v=AvZBg7qLzU8 Seriously though, Wikipedia is right this time. Now, there's a strong likelihood that you've had gravy fries or cheese fries (I've been eating both at Nectar's since I was a kid), but until recently it's unlikely you had tried a dish that is somewhat of a combination of the two. In fact a few years ago, you could have been forgiven for overhearing "Poutine" as a mispronunciation of KGB All-Star and current Russian President, rather than a signature Québécois dish. What's interesting about this trend is the fact that here in Vermont we border Quebec, so for once we're early adopters. As the country gets a taste for poutine, they'll trace its introduction back through us, the way BBQ spread up from the South, etc. And lest some snobby local foodie who knows entirely too much about cuisine from our neighbors to the north come along and claim everyone already knew about poutine, I've got Google data on my side: As Google Trends clearly shows, interest has climbed steadily over the last decade. In fact, a similar chart from Google's Ngram Viewer shows right in the Google "onebox" results for the search 'what is poutine': 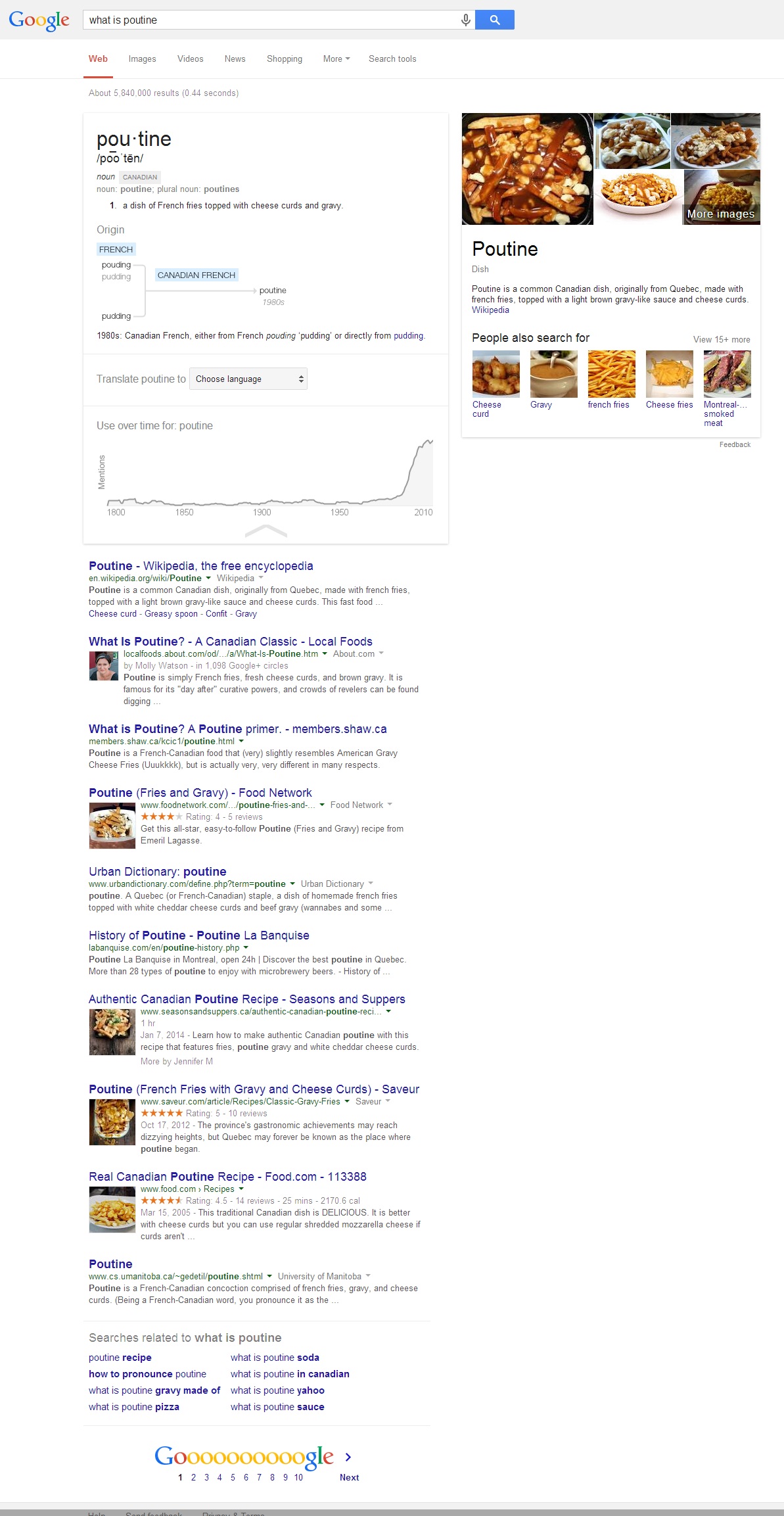 If you aren't familiar with the Ngram Viewer, it's basically a tool that searches through Google's digitized books for a user's keywords and and then graphs usage frequency by year published. In addition to literary mentions of "poutine", I find the "what is poutine" Google search results interesting for a variety of other reasons. Not only does Google feel the topic warrants knowledge graph results to the right, with a description and related search links, but they're also including French to Canadian French etymology results below the definition results. They're also showing one organic result with an authorship photo, along with 4 poutine recipe results that are supplemented by recipe photos, prep times, calories and user star ratings. All and all, the "what is poutine" search produces a nice little cross-section of what modern Google search results, with all of the little bells and whistles, often look like.

Throughout this post I've operated under the premise that you've seen poutine popping up on menus all over town, but in the unlikely event you haven't, here are links to the menus of just a handful local places we know that serve the dish:

Other restaurants, like Winooski's own Misery Loves Co., change their menu weekly, and rotate poutine in and out, so you just have to keep your eyes peeled. If your VT restaurant serves poutine and you'd like to be included in the list above, feel free to post a comment below and we'll add you ASAP. So to recap - poutine is dish only recently spreading from Quebec into Vermont (and beyond?), and graphs showing increased interest are just one part of the informative and multimedia heavy Google results that are displayed for related searches. More Poutine Resources: