Skip to Content
Summary: Since 2011, Google has released animals into their search results to devour low quality search results and spammers. First Panda came to punish "low quality sites" where content was thin and/or "scraped" from other sites. Then in 2012 Penguin marched in and pecked all violators of Webmaster Guidelines, like link spammers and keyword stuffers. That got us wondering - What update animal will Google release on the world wild web next? You may recall that in my 2013 SEO predictions post, I suggested that after Google's success with Panda and Penguin over the last couple years, it wouldn't be surprising to see them continue releasing other "animals" going forward. But which animals, and how did they ever choose the first two? Believe it or not, Google named the 2011 quality update "Panda", not after the endangered animal, but after one of the engineers responsible for the algorithmic breakthrough - Navneet Panda. It's unclear how they came up with the name for the over-optimization update of 2012, but it seems they just decided to stick with the animals starting with the letter "P", and so the Penguin was born.... er, hatched. So assuming Google sticks with the "P" animal names for major updates in the future, I thought I'd take a stab at predicting what the next update animal might be. I'm actually going to play the odds and throw 5 of them out there to increase my chances of achieving oracle status, should any of my guesses prove correct. So without further ado, here's your ticket to the Google zoo. 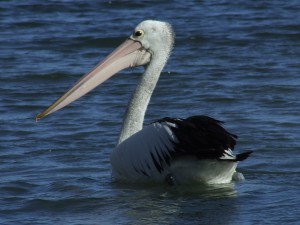 When pelicans scoop up fish in their beaks they also take in a lot of water. To drain and filter out that water before swallowing, they're equipped with a large throat pouch. Consume the good, spit out the useless. I expect that Google's Pelican update will behave in a similar manner. When someone searches for seafood restaurants, all web pages that seem even remotely related to the user's search will be scooped up and then Google Pelican will intelligently filter out the results that don't actually apply. Think seafood search results aren't an issue? Think again! I wrote that post back in September, and as I demonstrated toward the end, Google struggles to understand search intent for "seafood" searches, at least when searches are performed by people whose location settings place them in Boston. With any luck, Google Pelican will help the search engine filter out the seafood shows and restaurant food supply companies.

If Google decides to introduce the Platypus as its next ranking algorithm animal, we should expect the search engine to begin to track down spam sites in unique new ways and severely punish them. Similar to the way a platypus tracks prey through electrolocation (detection of electric fields that are the result of muscle contractions), the algorithm update will allow Google to more precisely detect spam signals. Then, without notice, the venomous Google Platypus will nail these spam sites with their ankle spurs. The poison will rapidly tank the rankings of any site the Platypus believes has used blackhat SEO strategies.

It's no secret that Google rewards websites with great content, especially content that is updated regularly. As a general rule of thumb, you should be actively updating your website, writing blog posts as frequently as possible and engaging on social media sites. Google hasn't been looking for "set it and forget it" websites for years. They want sites that are in it for the long haul. Sites that are willing to work for there next meal, like the polar bear which is known for distance swimming up to 220 miles! Why should Google Polar Bear not expect you to put in some effort to get prominent positioning in search results? If Google decides to unleash its own version of the largest land carnivore and your site hasn't changed since 1998, don't be surprised when you get devoured by the Polar Bear.

Oh I can just see the headlines on SEO blogs now.... "Stuck By The Google Porcupine?" or maybe "Google Porcupine Spikes Rankings!" Anyway, porcupines are by and large nocturnal and not particularly social creatures. Similarly, the Google Porcupine isn't in to "social for the sake of social", so if you're attempting to manipulate search results and social reach by buying Facebook Likes/Twitter followers or creating multiple fake accounts on any social media platform, you could be in trouble in 2013. Google Porcupine feels about social media spam the way Sweet Brown feels about bronchitis - "Ain't nobody got time for that". 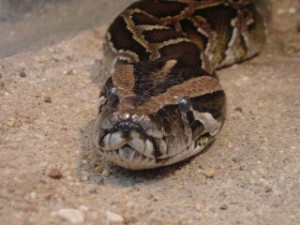 Like the "real world" snake, Google Python will squeeze its prey into submission. Its prey? Sites that violate Google's Webmaster Guidelines - aka Webspam. Sites that have used blackhat tactics will at first feel a little pressure as their rankings slip. If, after Google Penguin sends out unnatural link warnings, spammers ignore them, Google Python will continue putting the squeeze on and these sites' rankings will continue to slide. Eventually constriction will squeeze the life right out of these spammy sites and they'll be removed from search results all together, at least temporarily. Unlike the real world snakes, Google's Python won't be restricted to Africa and Asia, although these continents will be major targets given how much webspam actually originates on them, as a result of supposedly legitimate SEO companies outsourcing "link building". What do you think are the odds Google will choose any of these critters as their next algorithm animal? If not any of those 5, how about any of the following: Side Question: Why are so many "P" animals birds? If you'd like to take a stab at guessing the next Google update animal, please comment below - we'd love to hear your suggestions! Crap! You know what? "P" isn't the only commonality between Pandas and Penguins.... They're also both black-and-white. So maybe we should have been looking at animals like zebras, skunks and Holstein cows? Or maybe Google requires that both criteria be met - black-and-white animals that start with "P", which would obviously be rather limiting. Or what if I'm completely off the mark here, and Panda and Penguin are the only two animals Google has any intention of releasing into the wild? After all, they were designed to address the two major issues with search results - low quality sites (Panda) and webspam (Penguin). We also know they've continued regular updates for both since they were released so perhaps that will just continue and eventually there will be some overlap and a hybrid will be born... Google Pandguin.... or Google Pengda.... 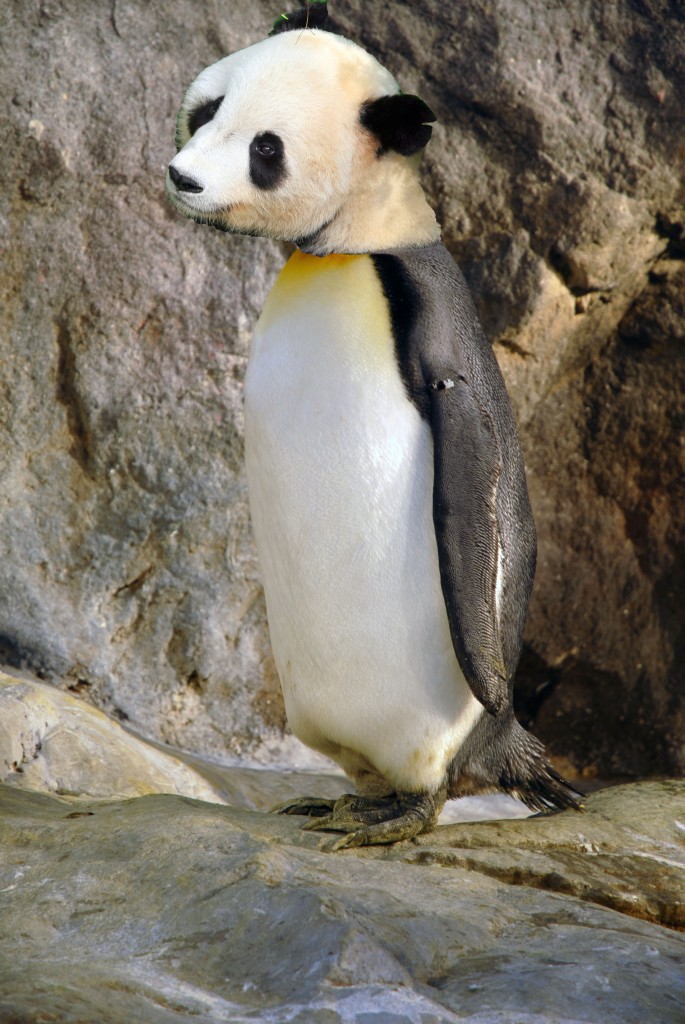 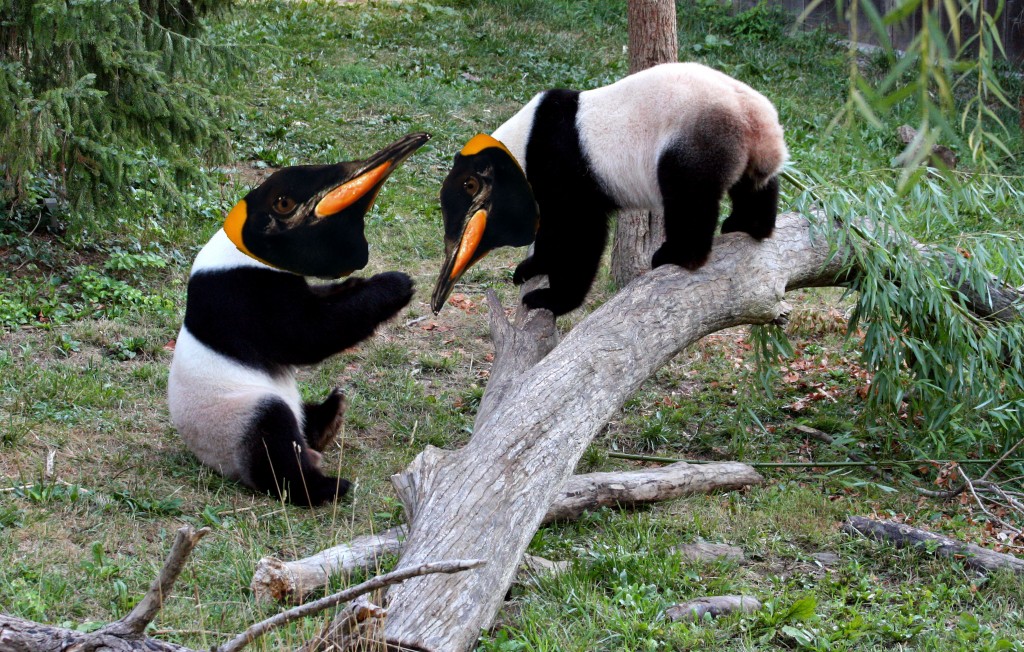 Yeeesh, that was disturbing to say the least, eh? Well, we'll have to cover those mutants and any other potential Google animals some other time...