Skip to Content
If you're an SEO, content marketer or anyone with even a passing awareness of internet marketing, then you've undoubtedly heard all the buzz around Google Authorship in recent years. You may have even read my 2013 guide on Authorship setup, if ya knew what was good for ya. Anyway, the hype all centered around getting your own bio image to show up in search results, to improve visibility and click-through rates. 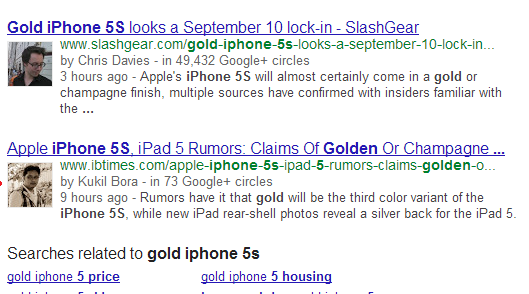 While SEOs and online marketing professionals pursued Authorship setup as best practice to improve CTRs and traffic, Google pushed it as a way to build authority and trust with readers. In fact, as I write this Google still has a page up over at their InsideSearch site, encouraging users to take advantage of Authorship, including a screenshot of Matt Cutts, head of Google's Webspam team's profile photo in search results:

In light of the topic of today's post, my favorite of their reasons to set up authorship is:

Over to you, Google's own John Mueller: That's right, even though Google InsideSearch is still recommending it and the setup pages still exist, Authorship photos in search results - a large part of the reason anyone would invest the time to set Authorship up in the first place - were taken away about a month ago. But why?

Guest blogging over at Search Engine Land, Chris Silver Smith has a theory I like on why Google decided to drop Authorship profile images from SERPs:

The revocation of author icons was, perhaps, somewhat predictable. When they emerged, I described them as a sort of “gift” or “bribe” Google was providing to webmasters in return for integrating with their major social media effort, Google+. The increased visibility in SERPs from authorship icons was blatantly an incentive for content creators to join the platform.

It’s possible that Google+ did not achieve the level of widespread adoption the search giant was hoping for. Adopters of authorship markup consisted largely of tech-savvy bloggers, companies and search marketers; most small businesses and less-savvy individuals and organizations simply didn’t do it. I think either they achieved the social usership level they desired, or the platform just wasn’t performing as hoped — both explanations seem plausible, considering the announcement that author icons would be going away came not long after the news that Vic Gundotra, father of G+, was leaving Google.

Apologies to Smith for the excessively long excerpt, but like they say - don't fix what ain't broken. He buttoned it up so well, I don't really have much to add but: https://www.youtube.com/watch?v=m3OggZD3faU For his part, Forbes contributor Jayson DeMers, polled some other industry heavy-hitters on why they think Authorship photos have been dropped, and their theories run the gamut from photos taking up too much real estate on mobile to deliberate attack on CTRs because Google wants users to stay  on a "Google page" rather than click through to the authors' sites. Authors made the point that authorship images might even imply endorsement of content, when in fact they didn't speak to quality or accuracy of the content at all. Moz's Rand Fishkin tweeted another interesting theory before backtracking a bit to DeMers:

IMO, most compelling explanation for Google removing profile pics from search is that it distracted from ads, and cost advertisers clicks — Rand Fishkin (@randfish) June 25, 2014

I'd say that all of the theories posited by all of these SEOs and content marketers are plausible, but this comes in at a close second to the Smith's thoughts above. The Forbes piece ends by explaining the remaining benefits of Google Authorship: These are all valid points, but the removal of Authorship photos is a huge blow to content marketers and bloggers. Still, when Google says "jump", we ask "how high?", so we would advise sticking with Authorship setup as a best practice. The images are gone, but author name can still appear which can be more attention grabbing than other results. What do you think about Google removing Authorship photos? What do you think their true motivations were? Have you seen your click-through rates or traffic dip over the last month? Please let us know in the comments below! *UPDATE* - 8/6/14 Writing over at Search Engine Land, Aaron Friedman is claiming that authorship photos "live on", but in reality he's talking about Google+ profile's showing up next to Google+ posts, or as he says - authorship photos were removed "only from external sites". I certainly observed this as well, but I view Google+ profile images showing up next to Google+ posts in search results as something completely different than "authorship photos", for reason's Friedman himself points out: Even still, it's a point well taken that Google is rewarding those that choose to use its social media platform, so it's a marketing channel that shouldn't be ignored. And I also agree that it's still worth setting up authorship, but I would stop short of equating photos next to Google+ results "authorship". As always, it's all about kissing up to the one who controls our fate.