Skip to Content
Summary: Google Adwords changes are nothing new, but when your campaigns target specific regions, it's especially important to understand how any new geotargeting changes might impact the performance and success of your campaigns. Adwords recently made some significant changes to location targeting options for various countries around the world, including the addition of an option to target regions in the United States based on Nielsen® DMA® (Designated Market Areas) regions. A couple of weeks ago Google Adwords released a handful of changes to their location targeting settings, including adding the option of targeting where ads will be displayed based on the Nielsen® DMA® (Designated Market Areas) regions:

U.S. metro changes We've recently changed our U.S. metro targeting areas to Nielsen® DMA® (Designated Market Areas) regions. Now your online campaigns and reporting will more precisely match TV-based audience data and campaigns. If you’ve been using metros, you’ll notice that the new geographic shapes look different on a map. While you might see some increases or decreases in traffic with the new regions, we estimate the impact will be small for most advertisers.

Before you panic, let me reiterate that this is an OPTION they've added. This hasn't replaced Adwords' old geo-targeting options, at least not for now. If you've been using GAW for years, then you know the location targeting tool has evolved quite a bit over time, but generally they like to ease us in to changes before phasing out old options. It seems they've at least done that here, but in this case I truly hope that his remains optional and they don't remove the other geo-targeting features. Why does all of this matter, and should it matter to you?

If you run a small, local business like many of our clients do, this could have a significant implications for your online advertising campaigns. Take a look at the location settings in one of our old Adwords campaigns, in which we were targeting the entire state of Vermont: 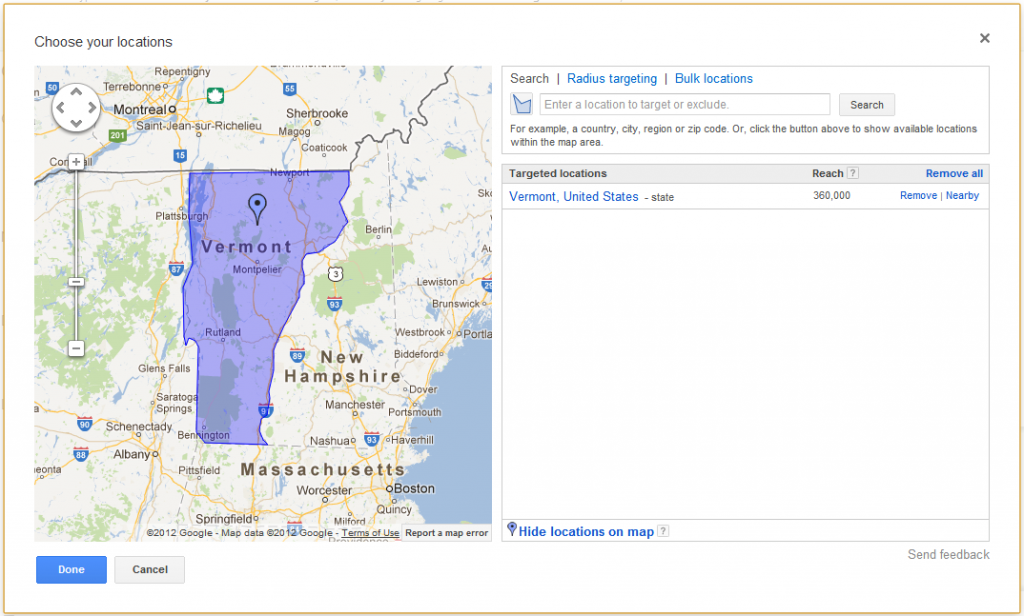 Pretty straight forward and what you would expect. Now look what happens if instead of all of Vermont I just want to target Burlington, VT: 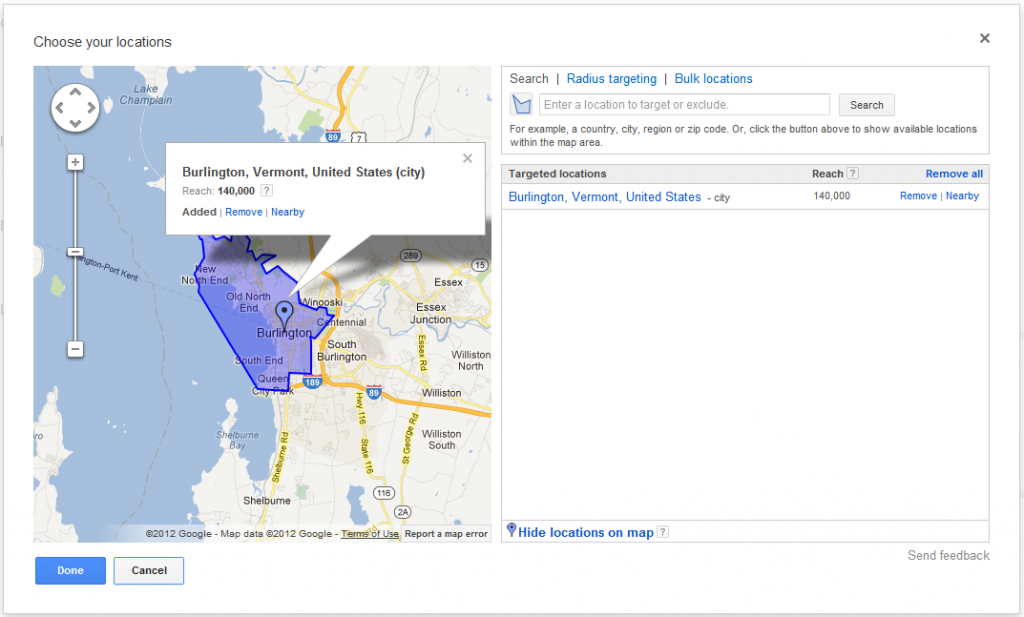 Again, no surprises. But now when you search for "Burlington" in the new location targeting settings window, look at the new Nielsen option: 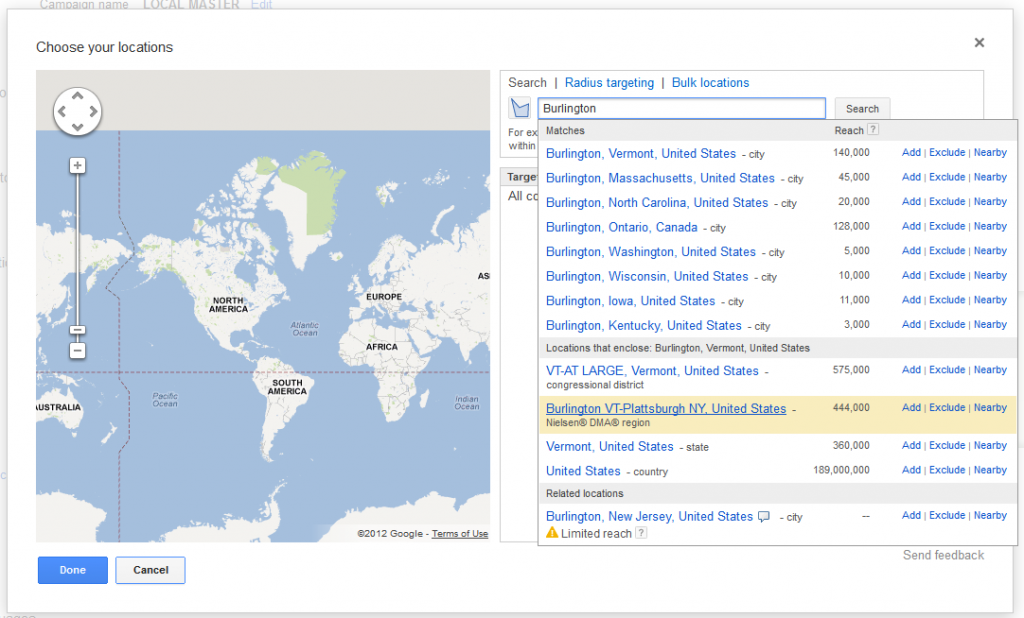 "Burlington VT-Plattsburgh, NY, United States". Again, we're talking about Nielsen, so this shouldn't come as a huge shock to anyone living in this area. It's no secret that we live in a very small, low population region and we share even our local television networks like WPTZ and Fox 44, and to a lesser degree WCAX, with Plattsburgh, NY. In fact, the Nielsen region actually extends into parts of New Hampshire: 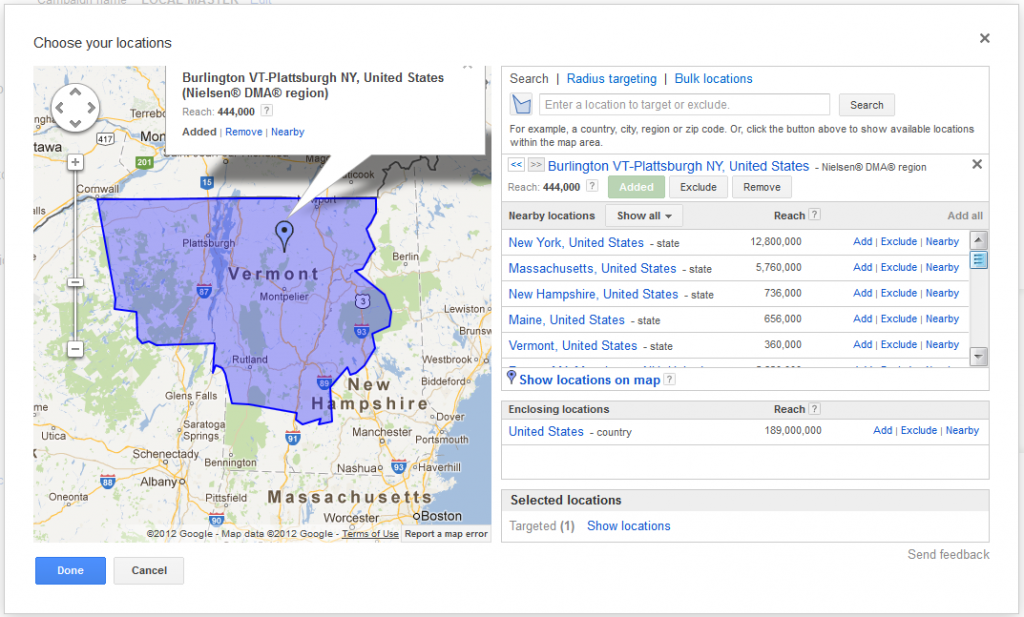 But while we may be watching the same television channels as our friends across the lake, and in 3 different states, are we identical target audiences for advertisers? I don't know enough about television advertising technology to say for certain, but I'm relatively sure that viewers in Plattsburgh, NY and Lebanon, NH see the same exact commercials as we do. Given that the majority of us don't travel back-and-forth across the lake or to NH that regularly, this strikes me as less than ideal for advertisers who are forced to spend their ad dollars showing ads to a less targeted audience. The point I'm making is that the new Nielsen® DMA® targeting feature in Adwords may not be the way to go for all advertisers. It's going to depend on the type of business you run and where you offer your products and services. For example, if you were a real estate agent serving Chittenden County, you would probably want to avoid Nielsen® region targeting in your ad campaigns. However, if you were the FlynnTix Regional Box Office and you were running Adwords ads, you might consider having them display for Google users in a broader region, knowing that people do travel short distances to see weekend shows, etc. It all boils down to knowing your target audience. Again, I hope this option stays an option and doesn't replace other targeting options. But I can't help but wonder if it might, eventually, particularly as we continue to see a blurring of the lines between TV and internet with Google and Apple "TV", streaming services like Netflix and Amazon Instant Video, built in Wi-Fi with apps on TVs and Blu-Ray players, etc. With Google already offering TV advertising and as television and internet media sort of get jumbled together, would it be all that surprising that Google switches up their whole location targeting system to follow the same patterns as Nielsen? I suppose revenue would be the determining factor. In closing, I just wanted to point out that when I was playing around with the Adwords geo-targeting tool in preparation for this blog post, I noticed something a little odd when looking at a campaign that targeted the entire US: 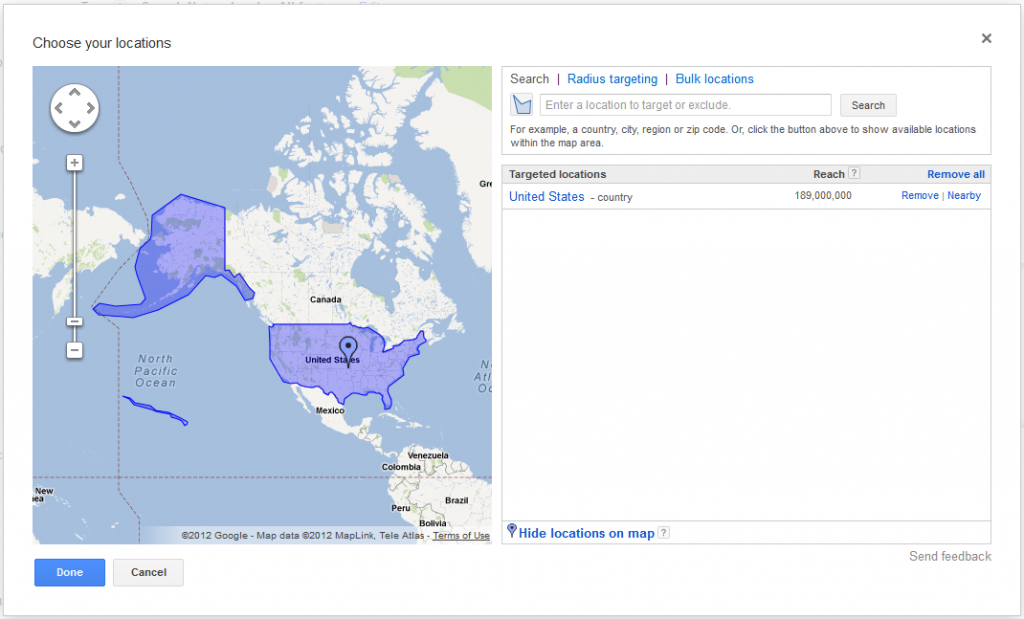 Who knew Hawaii was a long, skinny snake shaped state!? Seriously though, doesn't it look longer than it should even if they were just going to throw a blob over the entire archipelago? I zoomed in to the northwestern end to figure out what was going on, and that revealed the problem - Google is including the Midway Islands, even though they're over 1,000 miles from Hawaii: 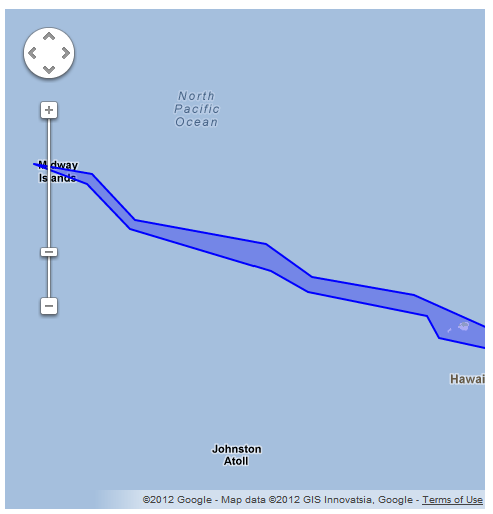 I suppose if I were to argue that their population of 60 hardly justifies inclusion in Hawaii, the push back would be that they're still a United States territory. But if that's the criteria, then why aren't Guam or Puerto Rico included? Populations 182,000 and 3.7 million respectively. This is all trivial, but I just found it a little strange that Adwords felt it necessary to include Midway Atoll, again over 1,000 miles from Hawaii, which itself is 2,400 from the continental US. I point it out only to highlight once again that Google isn't infallible, so it's important to always closely monitor your online advertising campaigns and don't just put all of your trust in the Google Machine. Be sure to read the full post at the Adwords blog to learn more about other new location targeting changes that were recently made, including the addition of Canadian postal codes and bringing city level targeting to additional countries. Of course, we understand that all of this can be difficult to keep track of for many business owners. When you've got a business to run, Google can hardly expect you to stay on time of things when they're constantly changing. If you find yourself feeling overwhelmed by all of this and you'd rather have someone else manage your campaigns, contact us today to learn more about our pay-per-click advertising management services.