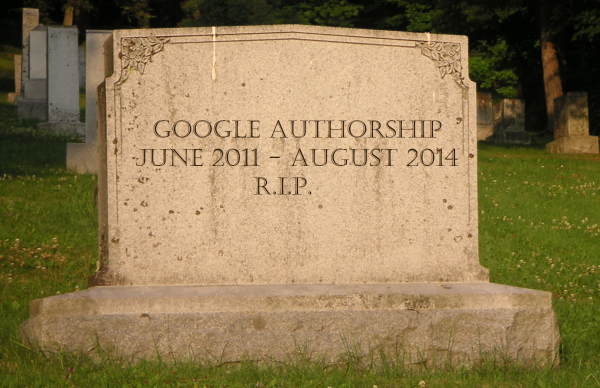 If you've been involved with online marketing at any level in recent years, there's a good chance you've heard the buzzword "authorship" making the rounds. Like other clichéd but necessary strategies including "social media marketing", "inbound marketing" and "content marketing", SEOs like myself have implored our clients to board the authorship train before it left the station. And with good reason - this was a strategy created and recommended by the by Google itself.

What Was Google Authorship?

For all practical purposes, Google Authorship was basically a way to get your name and bio photo to show alongside your blog posts/news articles in search results. The benefits, according to Google, were building trust and authority, while most content creators sought increased click-through rates as their pages stood out more in search results. Common sense led to the expectation of the latter, while Google simply hoped for the former. There were two setup paths, both of which were relatively easy, but I'll leave you to follow that last link for the technical aspects. The bottom line was that Authorship quickly became an SEO/online marketing best practice and everything seemed to be going along quite well - you'd set it up and your bio photo and name would show up attached to your content.

That Authorship Has Sailed

Then one day, just a few weeks back, anyone visiting the Google Authorship setup page was greeted with this lovely message:

Okay, it wasn't that abrupt. As Eric Enge over at Search Engine Land points out, there were warning signs of authorship's demise:

The cessation of the Authorship program comes after two major reductions of Authorship rich snippets over the past eight months. In December 2013 Google reduced the amount of author photo snippets shown per query, as Google’s webspam head Matt Cutts had promised would happen in his keynote at Pubcon that October. Starting in December, only some Authorship results were accompanied by an author photo, while all others had just a byline.

Those updates were followed by Google wiping out authorship photos in SERPS all together in June. But just the photos, bylines with links to author bios remained and since authorship setup remained, it was still recommended. Google's John Mueller said at the time that the change was done to simplify "the way authorship is shown in mobile and desktop search results" and the "clean up" SERPs on all devices. So why, after chipping away at it, did Google finally blow it up all together at the end of last month? John Rampton over at Forbes thinks he knows the answer:

Stone Temple Consulting discovered in a recent study that 70% of authors made no effort in connecting their content with authorship. In addition to that staggering figure, out of 150 pages sampled, 50 did not have author pages, while ¾ gave no attribution to an author. Furthermore, there were issues with confusing authors and containing no links to Google+ profiles.

Low adoption by content creators, essentially. But what about what Mueller has to say, now that they've put the final nail in the coffin?

... Unfortunately, we've also observed that this information isn’t as useful to our users as we’d hoped, and can even distract from those results. With this in mind, we've made the difficult decision to stop showing authorship in search results. ...

A cynic might say "usefulness" has little to do with it, unless you're referring to the value Google placed on using authorship as a vehicle for wider spread usage of their fledgling social media platform, "Google+", because Google+ setup was part of the process. But there aren't any cynics here... Whatever the reason, it's all over - time to get off the sinking authorship and onto what's next.

You may have seen the call out to "rich snippets" in the "authorship no longer supported" screenshot above. The live link actually takes you to this page for an explanation of the types of content that can be "marked up" and then shown as enhanced search results. Have you ever done a recipe search and seen an accompanying photo or recipe highlights right in the search results? How about product research and noticed star ratings right below the link? There are actually quite a few "markups" Google now supports, including the following:

If you follow this blog, you know that we've been talking about Rich Snippets/Schema.org mark-up for as long as we've been talking about Authorship - with our crash course dating back to 2012 - so it's not anything new. But there is renewed attention being paid to it as a way to stand out in search results, now that authorship has been put out to pasture... Particularly given that Google specifically links you to their introduction to rich snippets on the former authorship setup page. Over the last several years, Google has made vast improvements to structured data mark-up, including the creation of a testing tool which makes it a lot easy to verify if your code is right - a huge help for less technical folks who still want to be proactive in their SEO. So for now, rich snippets are amongst the many shiny objects we must all chase to satisfy Google and hopefully stand out in SERPs. The good news, if you're reading this, is that even today so few even get basic on-page SEO, so if you jump on structured data right away, you'll stay a step ahead of your competition. ***UPDATE - 10/8/14***

What if You Already Have Google Authorship Code On Your Site?

Our friends at iMarket solutions also posted on the life and death of authorship, and included this confirmation from Google that your rankings won't be negatively influenced if you leave the authorship code in place:

For those of you who have the authorship markup installed on your websites; don’t worry about Google punishing you for leaving the code in place. Barry Schwartz, the owner of the popular SEO blog SERoundtable.com, asked John Mueller in a comment on his announcement of the death of authorship if Google would penalize websites which left the authorship markup in place. John confirmed that Google would not punish you for leaving the markup on your website, and that in fact, visitors to your website still might appreciate being able to find out more about you and/or your company through your Google + profile.